…the myth, the legends, the facts… 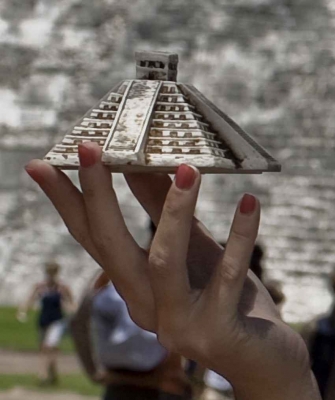 There’s nothing but jungle and beach.

You spend the days eating berries and chasing monkeys.

I would have fainted.

I bet Chichen Itza was surrounded by Mayans who were so astonished that they stopped breathing.

Chichen Itza hasn’t lost any of its ability to wow.

I’ve seen many visitors rock their head back in awe and almost collapse.

Chichen Itza Is One of the New Seven Wonders 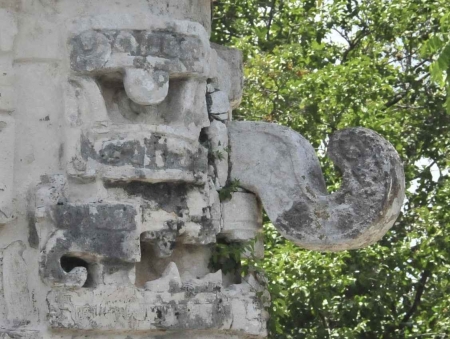 The first time I glimpsed Chichen Itza, I embarrassed myself.

I was trying to impress a chick, but when I witnessed the perfect stone walls I couldn’t stop swearing and blaspheming.

I was like, “No way this is real. Holy sh*t! That’s just insane. It’s like a damn mountain!”

It obviously had a similar effect on many people because Chichen Itza was voted in as one of the new Seven Wonders of the World.

But it’s the scale of Chichen Itza that causes everyone to swear and faint.

Perhaps Wikipedia can tell you how high.

I just know that it’s more than high enough to make you shake your head in disbelief.

How did they make it 1000 years ago? Slavery was legal at that time. It was probably cheap!

Take a quick look at this video if you want to get an idea of what it looks like there.

I scoured YouTube for several hours looking for a good video that captures the essence of this amazing place. However, I really didn’t like any of them that much.

Despite the fact that this video is not perfect, it at least gives you an idea of what to expect during your tour.

Of course if it will be much more majestic in person, but the wild and wacky music playing in the background creates some strange sort of anticipation.

Honestly, it spooked me out a little bit when I was watching – thinking of Mayan human sacrifices and all.

By the way, I cut off the first 25 seconds of the video and also the last few seconds of it as well.

The video was made by some idiot named Giovanni. (Who names their kids “Giovanni” nowadays?) He put all this copyright nonsense at the end and all sorts of credits in the beginning. As you’ll notice, he also has a watermark in the bottom corner of the video. How annoying!

I always get irritated by the kind of people who copyright things that suck. Who wants to copy his video anyways? It would be different if it was good. I mean, really–this guy should be doing the opposite and begging people to copy his video and make it better.

I added it here just to give you an idea of the Chichen Itza tour – and for no other reason.

Why You Need To Do a Chichen Itza Tour

I know what you’re thinking.

“It sounds cool, but if I miss a day on the beach the tan’s going to suffer…”

Or perhaps “I want to go, but I plan to be hungover until 3pm every day.”

The problem with Chichen Itza is that the photos don’t do it justice.

You look at the pics and think, “Yeah, looks good, but I’m getting drunk instead.”

Photos can’t convey the feeling of standing at the base of the pyramid and gazing to the sky.

Or that it takes you a couple of hours to visit the whole site.

Or the fact that you’ve visited one of the most beautiful places to ever grace our planet.

You’re not going for a five minute glance.

You’ll be spending half the day in a medieval Mayan world. 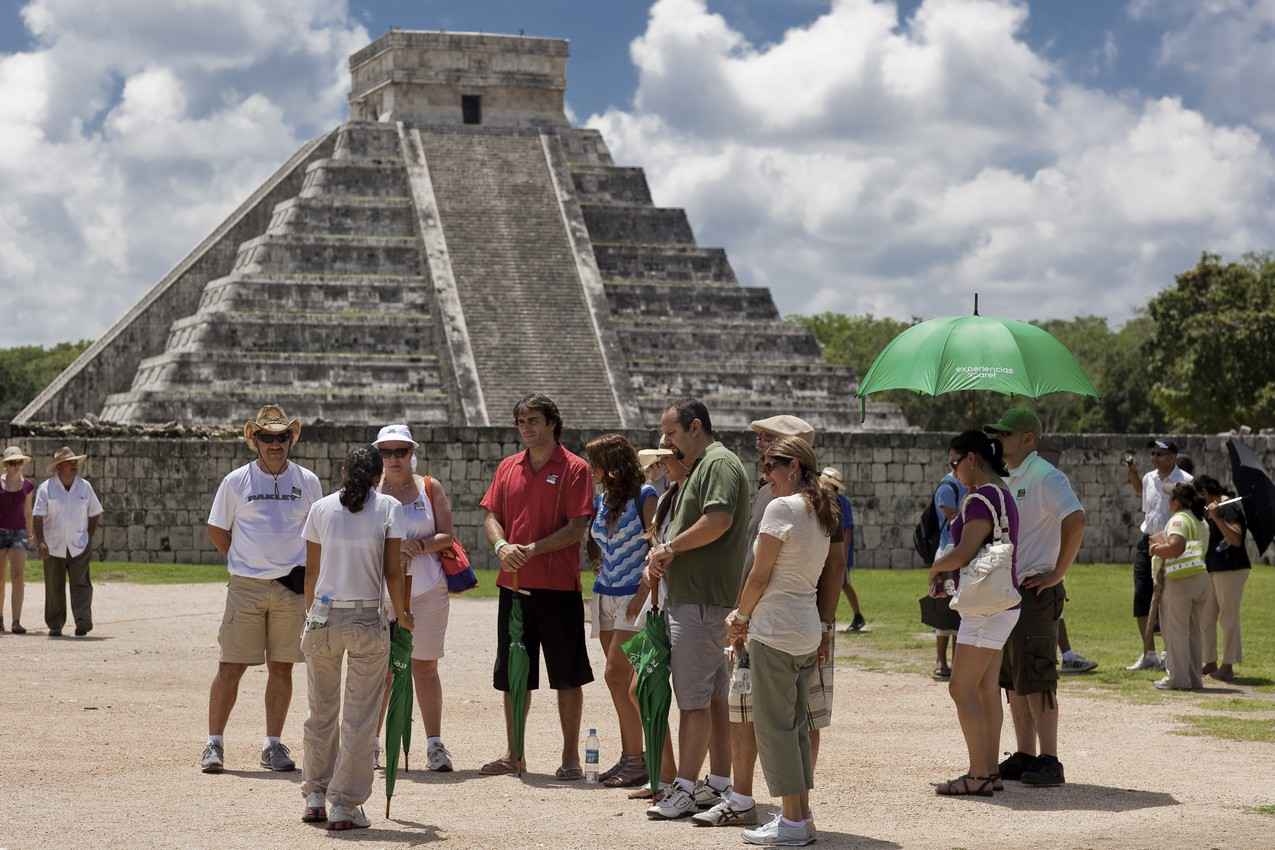 Why Is This Crazy Pyramid Here Anyway

I’m not much of a historian or archaeologist.

So here’s what I know.

The Mayans were this super cool group of people who lived in Central America from 2600 years ago.

They still live here, although they were mostly wiped out by the Spanish.

They were expert engineers and thinkers – way ahead of their time.

In the heart of their communities, the Mayans built huge pyramids, and then surrounded them with massive pillars and temples.

Everything was designed to align with the stars and reflect astrological events.

Almost 50,000 people lived in and around Chichen Itza.

One of the reasons it’s so famous is because the central pyramid, El Castillo, is the largest of any Mayan city.

Everyone has seen and taken photos of El Castillo.

But that’s just the start.

I think that the Temple of the Warriors is just as impressive.

Wander around and you’ll find dozens of little ruins and sculptures.

It’s like walking into an Indiana Jones movie set.

You’re not going on a Chichen Itza tour to see one temple that you’ve already seen a hundred times in photos.

You’re going back in time to an ancient Mayan world. 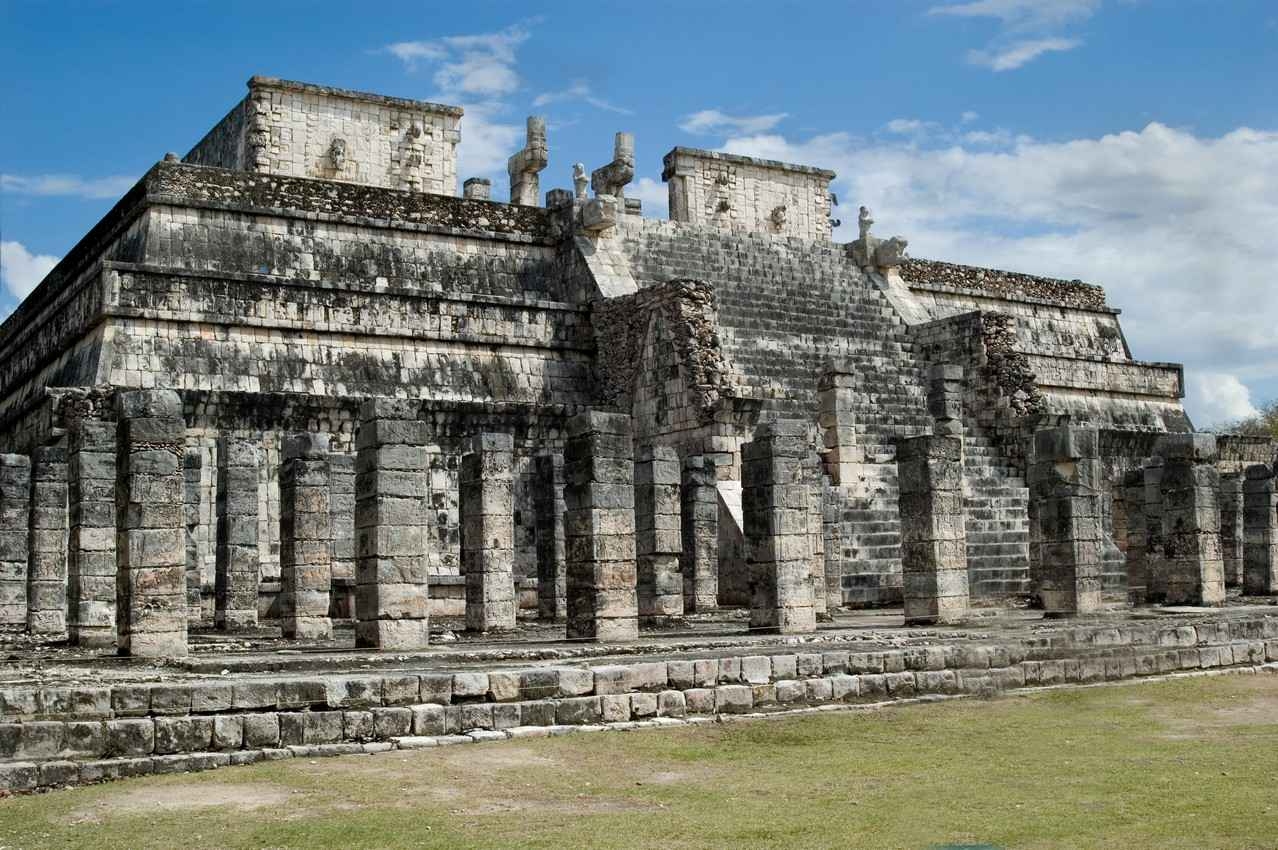 Why It’s Difficult To Go Without a Tour 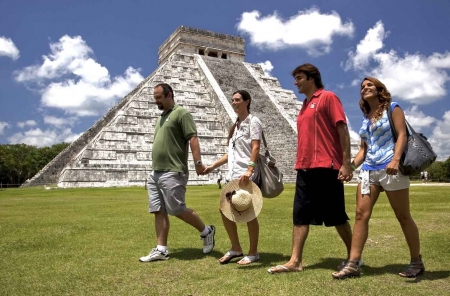 Unfortunately, the Mayans didn’t build their pyramids in places that would later be on the Mexican highway network.

There’s pretty much nothing near Chichen Itza.

You’ll see a couple of villages on the way from Playa Del Carmen, and that’s about it.

Other than a load of untouched jungle.

So it’s almost impossible to go there by public transport.

I can just imagine the conversation if you tried getting on the bus:

“Are you going to Chichen Itza?”

“What, you mean that ancient city where nobody lives anymore….errr, no.”

You could take a cheap Chichen Itza tour in a big tour bus.

But it’s much nicer to go with a smaller group.

Even better, if you’re four or more people, find a driver who will take you there.

What Happens On a Chichen Itza Tour 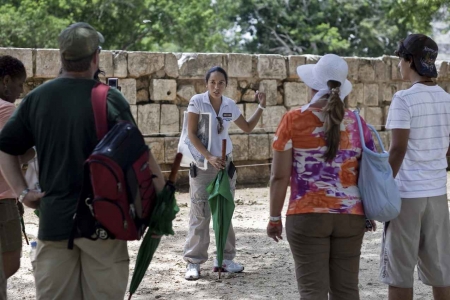 Chichen Itza is in the Mexican state of Yucatan, which is adjacent to Quintana Roo.

So the first part of Chichen Itza tour is getting up early and driving across to the ruins.

Chichen Itza can get crazily crowded around midday.

That’s when the sun is out. It’s hot, busy, and you get pissed off with all the Chinese tourists and their spaceship sized cameras.

That’s why it’s best to leave on a very early tour from Playa Del Carmen.

Arriving at 10:AM makes a huge different in regard to your enjoyment.

You’ll get a few hours on your own to explore Chichen Itza.

Take your time and don’t just charge straight for the famous pyramid.

It’s nicer to check out the other sights and then build up to El Castillo.

Some tours include the services of a guide.

It’s nice that the history comes to life, although I prefer to make up stories in my own head.

Most Chichen Itza tours include a stop for lunch.

Some include the meal, others don’t.

More than likely you’ll get taken to a dodgy tourist souvenir shop on the way back. Typical Mexican stuff.

That’s the standard tour, although a number of Chichen Itza tours offer a few extras.

You can do tours that also visit the untamed jungle nearby.

Or tours that incorporate other Mayan ruins.

If it’s going to be your only day away from the beach, you might as well pack in as much as possible right? 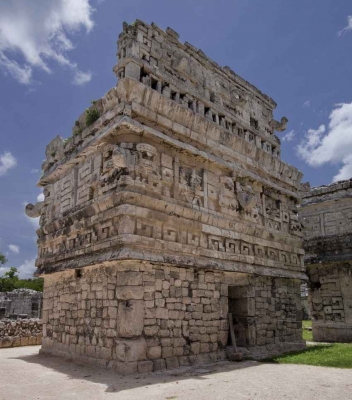 Chichen Itza tours start at around $45 USD per person.

There’s so much competition that you should be able to get a good price.

But that price normally excludes the Chichen Itza entry fee.

This is on a group tour with other passengers.

If you have four people I really recommend finding a driver and doing it yourself.

This gives you maximum flexibility and a chance to avoid the crowds.

When booking a Chichen Itza tour don’t just get the cheapest.

You won’t have to look very far to find a tour.

I’m sure that some of the local human parasites will approach you in Playa Del Carmen.

My advice is to avoid the street pushers and book with either your hotel, an agent with an office, or a friendly driver that you’ve met.

Just remember to bring the smelling salts in case you faint when you first glimpse Chichen Itza!

I hope you make it here soon!

Now it is your turn. Do you have any tips or suggestions about taking a Chichen Itza tour? Please leave them in the comments section below!