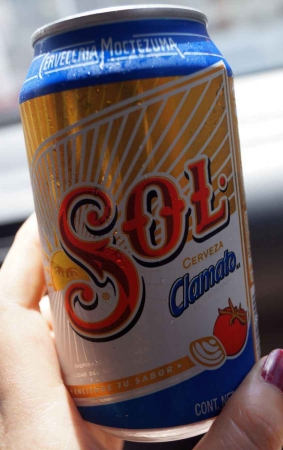 Despite moving to Playa Del Carmen and being surrounded by beautiful women, I still don’t seem to be having any luck in the girlfriend department.

Although to be honest, I’m not really looking for a girlfriend – or even want one. Women are just so unbearable sometimes.

Despite this, I was lamenting this with a female friend.

She said “I’m not sure girls are interested in a guy who has a collage of beer labels as the centerpiece of his living room.”

What a load of whitewash!

Who doesn’t want to admire the carefully torn off labels from 60 different styles of Mexican beer?

I think it’s a piece of art that highlights my creativity.

She thinks it makes me look like an alcoholic.

In America I used to visit the same gloomy bars and drink my own bodyweight in Budweiser.

Now I realize how short sighted that was.

There are dozens of Mexican beers that are far tastier, cheaper, and more enjoyable than Bud – but only if you’re actually in Mexico.

Hot, half-dressed ladies who seemed turned on by an erect thing held in hand around waist level (a beer bottle, I mean).

So in an ode to the sheer variety and quality of Mexican beers, I’m going to talk you through all the different labels in my collage.

The Most Famous Mexican Beer – Corona

Corona is the Mexican beer that the world knows about.

It’s perfect for a hot day.

If you’re in Siberia and wearing an arctic fox hat, you’re not going to enjoy it.

But when the sun’s shining and the beach is full of women in bikinis, there is nothing quite like a Corona.

Corona is owned by the Grupo Modelo brewery, a multibillion dollar company that owns 63% of the Mexican beer market.

I think they’re the ones who have managed to convince the world that putting a slice of lime in your beer is a good idea.

I am not always sure why people do this.

Some say it’s to ward off flies.

I think that it’s sometimes fun.

It just somehow adds to the taste on a hot day and makes you think of the beach.

But I’m still not sure why you buy a Corona in a New York bar in December and it comes with a slice of fruit.

The Most Popular Alternatives – Modelo And Pacifico

Grupo Modelo are the ones spreading Mexican beer to the world.

Their other two big exports are Modelo and Pacifico.

It’s probably my favorite drink when I’m nursing a hangover and wanting to get back into action.

Modelo and Corona are easily the two most popular Mexican beers in Playa Del Carmen.

You can’t visit a bar without seeing both of these.

They have a Modelo Light version, which just means it has less calories – but you have to drink twice as much of it to get drunk.

Then they came up with Modelo Especial Chelada.

Which is beer with tomato, lime, and salt.

Salt and tomato in beer? Not fresh tomato juice?

Pacifico is a pale lager which originated on the opposite side of Mexico from Playa Del Carmen.

Again I like it’s crispness and how easy it is to drink.

Open a Pacifico, and before you know it, the whole case has disappeared.

I don’t want people coming to Playa Del Carmen and ordering a Budweiser.

And it costs twice as much to boot!

But I understand that some people are filled with a certain patriotism and want to stick to what they know.

The Grupo Modelo brewery has a few American-style lagers, and if it helps with your patriotism, I’ll lie and say that the recipes came from the States.

I find that they are very easy to drink, although not huge on resonant flavors.

Estrella is the biggest seller of these.

But you can also find Barrilito and Superior.

Then there are the regional variations depending on where you are in Mexico.

I find that you barely even notice that these have alcohol in them.

Then next think you know, you’re rolling around on the floor singing songs about tacos.

Then the weight of 12 bottles suddenly kicks in, and you turn into an incoherent mess.

Mexican Beers With A European Flavor

I hope you can already see the variety on offer.

Mexico also offers a large number of pilsners – a type of beer named after the city of Pilsen in the Czech Republic.

It’s not for the beach.

It’s best enjoyed in a smoke-filled bar with loud music.

My favorite variety is Tecate.

Tecate also has a titanium version which has a little more kick.

You can also try Pacifico Clara or Montejo.

But if you’re going for a pilsner, my favorite choice is Bohemia.

You won’t find it everywhere, but when you do, I find that it’s impossible to drink anything else for the rest of the night.

It’s one of those that seems to be unanimously hated by every single woman I’ve ever met.

I think that’s what makes it great!

Check out their offshoots.

Like Bohemia Obscura, so called because you can’t remember anything after a session on these.

The adventurous can dabble in a Bohemia Chocolate Stout.

Although I’m really not convinced that this heavy dark beer is best suited to the Mexican climate.

Other Mexican Beers From The Cuauhtemoc Moctezuma Brewery

This used to be a very Mexican brewery.

But it was bought out by Heineken, and since then, I find they’ve just been making loads of beers with different names that taste very similar.

The beer that made them famous is Carta Blanca.

For almost 500 years Carta Blanca has been sold in Mexico.

It’s reasonably strong, suited with flavor, and gives you memorable hangovers the next morning.

However, Carta Blanca seems to be disappearing as Heineken heavily markets Sol, their rival to Corona.

But a few buddies of mine argue that Sol is the only Mexican beer to accompany sunbathing.

Put a lime in it, sit back, and let the good times roll…

Being their number one export, Sol, comes in a load of different varieties.

Other than Sol Light, I think these are all gimmicks.

For example, Sol Clamato is beer with tomato juice and chili.

And the fizz in your mouth is terrible.

Then there is Sol Limon y Salt.

Really! What is it with breweries putting salt in beer?

This brewery is also responsible for Dos Equis.

A nice beer with a very original commercial about the most interesting man in the world.

In different adverts this man catches a marlin, bench presses two Asian chicks, and frees a bear from a bear trap.

If you’re in Mexico around Christmas time, then try find a bottle of Noche Buena.

It’s name means Christmas Eve, and it’s always good to have Jesus on your side when you’re getting raving drunk.

While the Mexican beer market is dominated by these two big breweries there is still plenty of choice for real beer connoisseurs.

Try anything from the Ramuri Cerveza Artesanal Mexicana brewery.

Their staple and easiest to find is the Diablo Blanco.

But this brewery rules when it comes to random concoctions.

If it’s storm season, and the wind is ripping through Playa Del Carmen, there’s nothing better than sitting back and watching it all with one of these in your hand.

If you dare, spend an evening on Broken Board, a German-style pilsner that breaks you in half the next day.

Microbreweries are not popular in Mexico.

But if you really go searching, it’s possible to find really original beer.

You know the types – the beers that come in funny glasses and have obscene labels.

They’re the ones that look funniest on my beer collage.

Or the Calavera Mexican Imperial Stout.

The Cucapa microbrewery specializes in funny-tasting beer with amazing names.

Best of all sit back with a bottle of Green Card, a barley beer that tastes more like cheap, expired wine.

While the microbrewery beers are hard to find, if you find a bar with one, then you know you can spend a whole day trying innumerable different Mexican beers.

What Are My Favorite Mexican Beers

I have so many favorites it’s impossible to pick just one.

Personally, I think the best part of Mexican beer is that there is a different one for every occasion.

For example, I take a Corona when I’m kicking back on the beach.

Then a Modelo for something to go with a meal at a restaurant.

For an evening with the guys, then sometimes I’ll drink a Dos Equis (or just stick with the other two mentioned above).

Then if I’m trying to impress people with my beer knowledge, I hunt down the cult classics like Botari Chonami.

But for all these words, there is only one true test of beer…how drunk it gets you!!!

So come to Playa Del Carmen and discover for yourself what the best Mexican beers are.

It’s your turn. What’s your favorite Mexican beer? Please tell us in the comments section below!