…you don’t want to miss this amazing place… 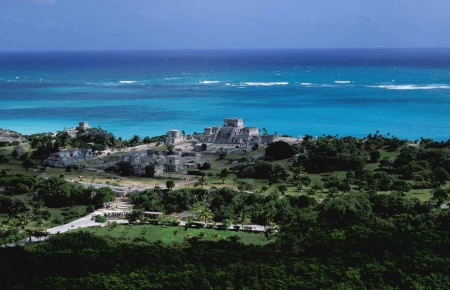 When I learned some of the stories about the Mayan people I thought they were insane.

Imagine sacrificing people as gifts for the Gods?

I read about the god of the moon, the goddess of suicide, and a god of earthquakes.

I couldn’t imagine believing any of it except for the god of wine – I think he is popular the world over!

But then I went to Tulum.

Beneath me was this stunning stretch of beach and ocean.

And surrounding me were these stone pyramids and temples.

If I’d have come to Tulum in the 14th century I’d have believed every story I was ever told about the gods.

Even in the 21st century there is something enchanting that makes you believe everything from their supernatural world. 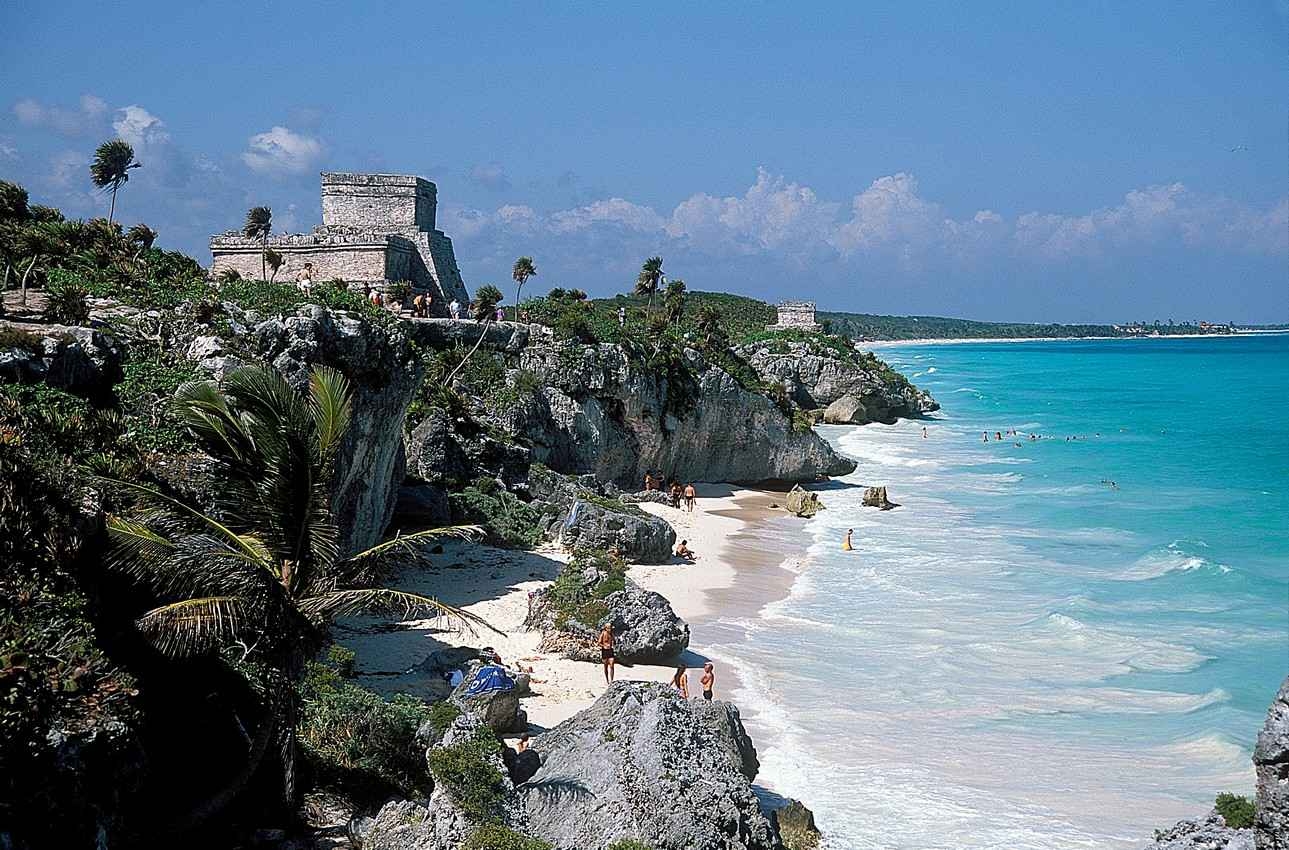 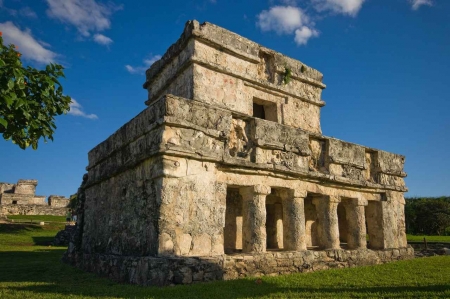 Tulum is the site of an old Mayan city.

It was one of the last cities built and lived in by the Mayans before the Spanish wiped them out.

Tulum was built in the 13th century and was home to around 5000 people.

It’s situated on a cliff facing out to the Caribbean Sea.

It’s this epic view that convinced me that I should take these Mayan gods a bit more seriously.

In fact, Tulum was the only Mayan city built on the coast.

It was their sea port and connection to the outside world.

Apparently Tulum was a very important place for worshiping the diving god.

You can see this god’s temple and he is definitely in a diving position, although people debate whether he’s diving from heaven to earth or just diving off the cliffs that rise above the sea in Tulum.

Why Is Tulum So Popular? 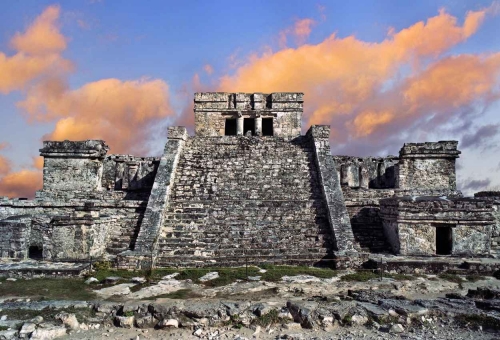 It’s easy to come here for half a day and get a dose of Mayan culture.

The location really is inspiring.

Even if you’ve seen other Mayan ruins, the location of Tulum is a photographer’s dream.

The ruins have been very well preserved, and everything is surrounded by a limestone wall.

The most prominent ruin is El Castillo, or The Castle, that overlooks the sea.

Peer inside the castle and you’ll find a painting of the three Mayan worlds; the world of the dead, the living, and the rain gods.

If you are a diver it’s worth paying your respects to the diving god.

I did this and then later I did the most perfect dive into the Caribbean Sea.

Unfortunately my swimming shorts came down on entry.

I didn’t realize it until I was ankle deep in the water.

Needless to say, the 10 or so people photographing the beautiful ocean also got to see what my shorts have been covering.

I’m still waiting for a photograph to appear on the Internet. Anyhow…..

Tulum is also very popular because it’s not just about the ruins. 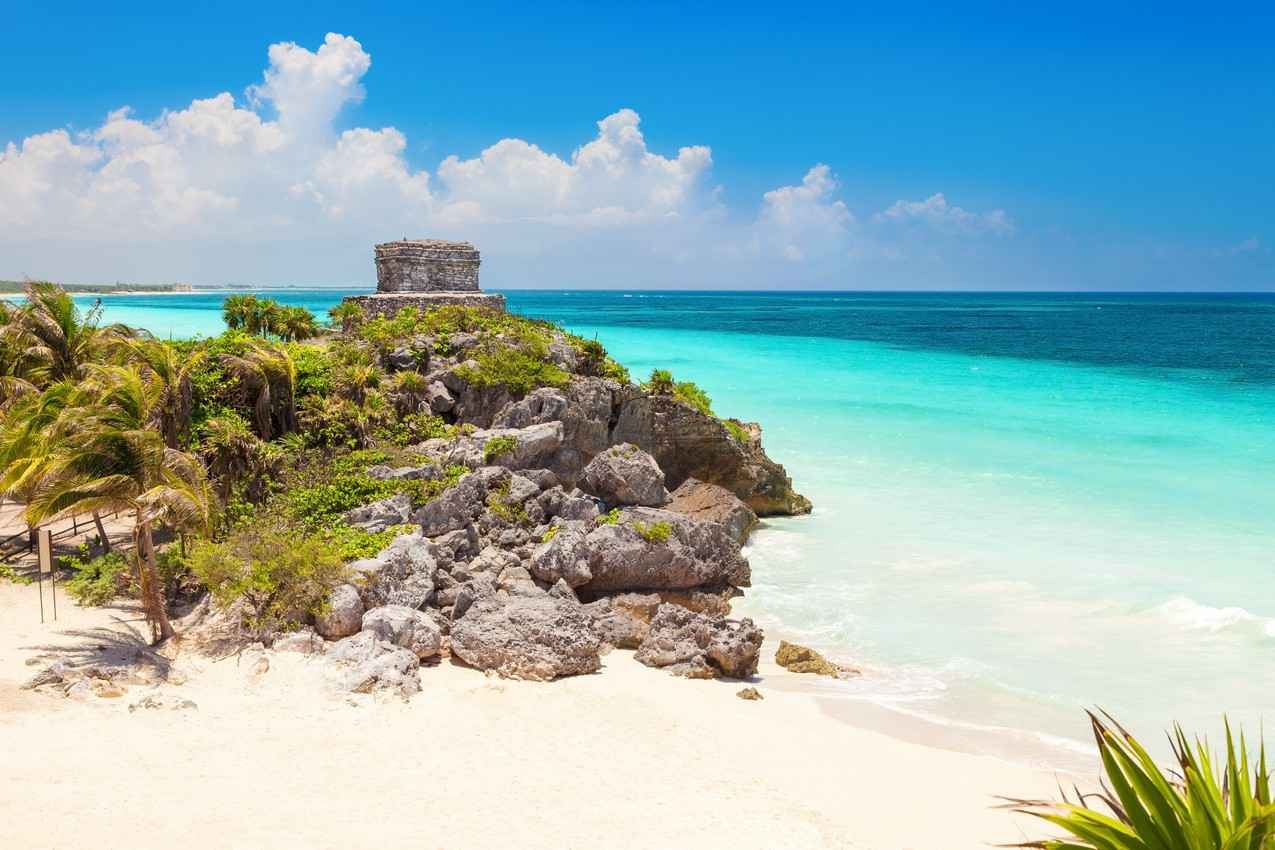 What Else Can You Do Besides Looking At Ruins? 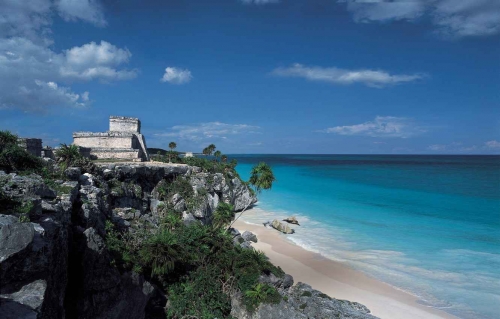 I like Tulum because if your buddies aren’t interested in culture you can just leave them on the beach.

Tulum’s beach was ranked no 4 in the world by National Geographic.

I can’t say if it’s that good, but you can take a photo and then sell some tropical beach postcards all over the world.

You definitely need sunglasses because the sand is so white.

And the ocean is that dreamy light blue color we all love.

There are some cool cenotes to check out in the area as well as some very impressive dive sites and snorkeling spots.

If that isn’t enough there is a monkey sanctuary.

So if your buddy is boring, you can send him to tell his stories to some primates.

In fact Tulum is its own destination with restaurants, bars, and everything to entertain you for a week.

I will warn you of one thing, however: Tulum life is slow.

Mexican life is slow, but the life in Tulum is even slower.

I’m not saying that’s a bad thing, but if you are from a city like Seoul, South Korea, you will probably be pulling your hair out unless you have learned to appreciate the Mexican lifestyle and slow yourself down a little bit during your vacation.

(Hint: People from big cities have a hard time doing this.)

However, the city of Tulum may have a hard time maintaining this atmosphere for much longer –

There are plans to really develop the whole area into a tourist mecca. 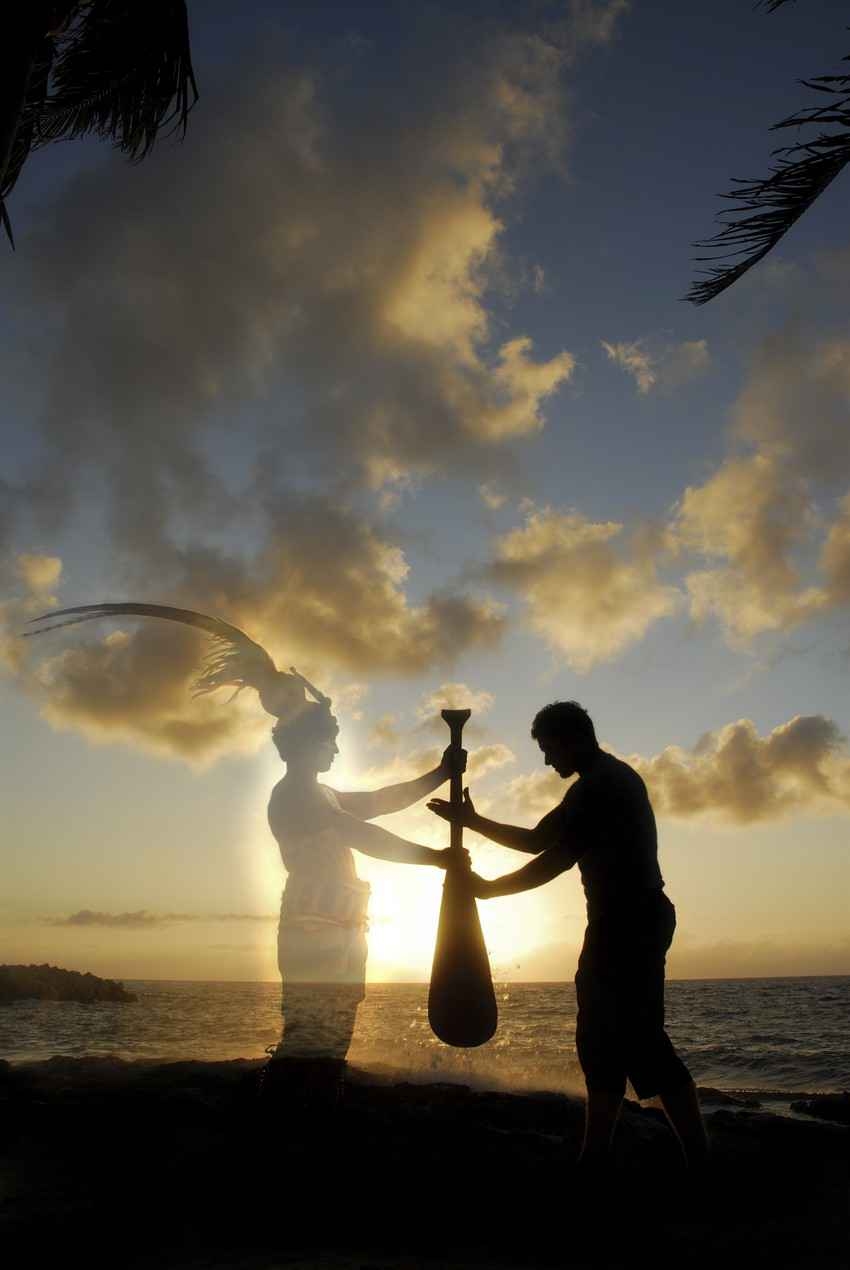 Where Is Tulum And How Do I Get There? 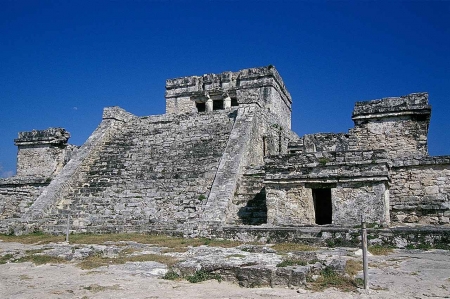 Tulum is situated about 40 miles south of Playa Del Carmen.

You just follow the main road along the coastline south.

There are signs everywhere.

Most people go to Tulum on a tour from Playa Del Carmen.

You get picked up from your hotel, explore the ruins, then spend some time on the beach.

You can also take a private tour by renting a van and a driver to take you to Tulum.

With private transport, the trip to Tulum should take around 45 minutes.

The coastal road is a beautiful one, so have your camera cocked and ready at all times.

There are buses every hour from the Playa Del Carmen’s bus station at the southern end of 5th Ave.

From here get off at the first Tulum stop and walk one mile towards the ocean to reach the ruins.

How Much Does A Tulum Tour Cost? 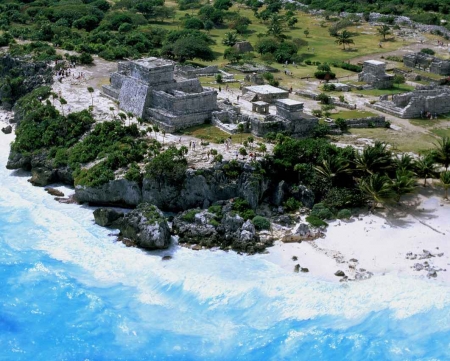 How long is a piece of string?

Many companies and individuals offer Tulum tours, and the prices vary considerably.

At the cheapest you can join a group tour for around $50 USD per person.

But this just includes your transport and entrance.

For a private tour you will pay around $250 USD for a vehicle and then $5 per person entrance fee.

None of these include a guide.

If you want an all singing, all dancing tour with a certified guide then you’re looking at something more like $400 USD for 4 people.

Most tours include some time to chill on the beach afterwards.

Some tours combine Tulum with another activity.

Perhaps a stop at a top snorkeling site or a trip to the Coba ruins.

What Else Do I Need To Know About Tulum? 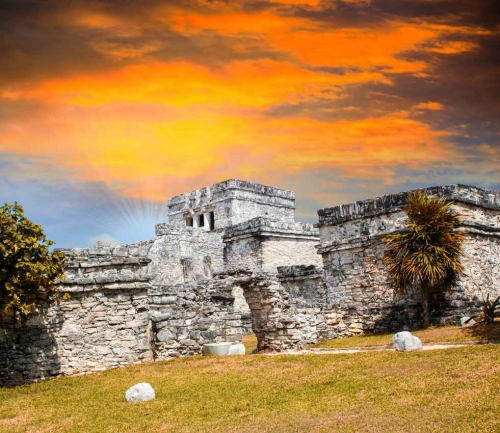 Tulum was formally known as the City of Dawn because it faces the sunrise.

It’s best to visit early in the morning.

If you’re too hungover just put your head out of the window on the drive.

The ruins look best in the morning.

Plus, in the afternoon they can get very crowded.

After enjoying the ruins take the steep steps down to the beach and marvel at Tulum’s very own private paradise – a miniature, natural, and uncrowded beach with a color of water that pictures cannot even do justice.

But no tripods – these are banned for some peculiar reason.

You won’t be the first people enjoying the ruins.

A 1984 movie called “Against All Odds” was filmed here.

Better to visit Tulum yourself and see the ruins and the beach in real life!

I hope to see you here soon…

Now it’s your turn. Is there some information that you can add to this conversation? Please leave it in the comments section below!