If you go into any tour office in Playa Del Carmen you’ll get offered a load of things beginning with X. 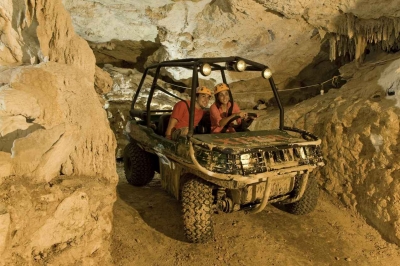 They’re all run by the same company and the most recent addition is Xplor.

The other X words have a real Mayan meaning.

Like Xel-ha, which means “where the water is born.”

Xplor is just a play on words, but if I was to make up a Mayan meaning it would be “underground nature meets overground jungle adventure.”

It’s located just 3 miles north of Playa Del Carmen, next to Xcaret, and a taxi will take less than 15 minutes. 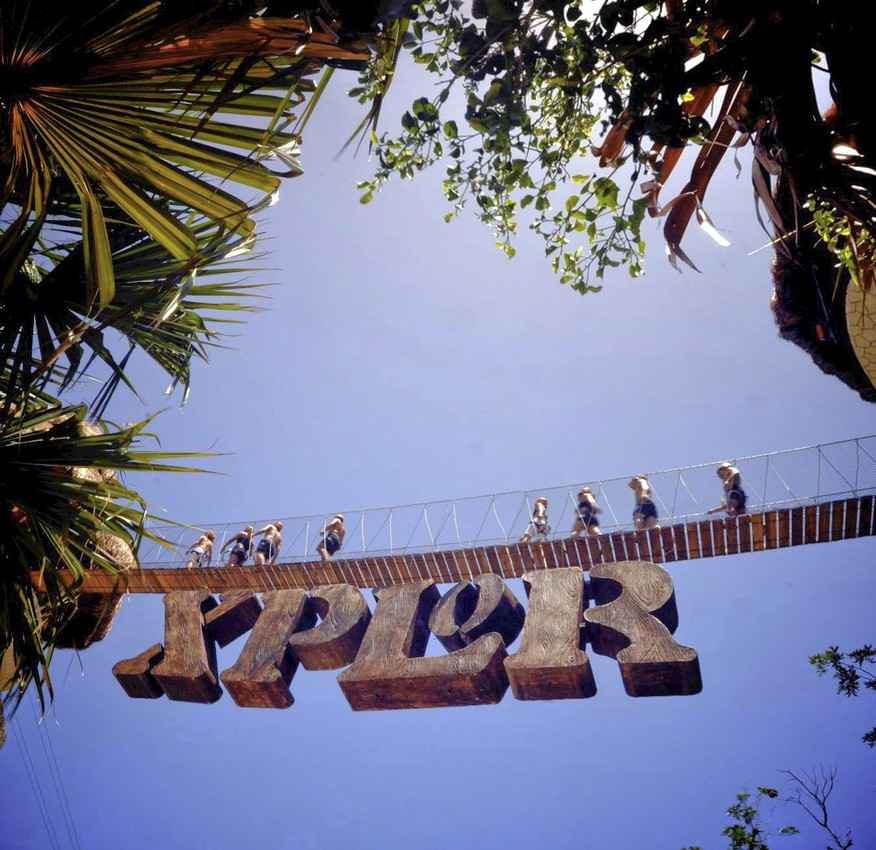 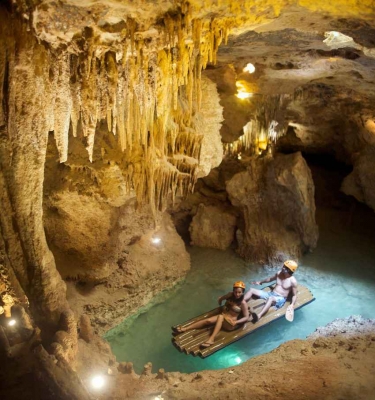 Xplor is basically an adventure theme park that’s situated in a unique piece of nature.

The park is part green jungle and part underground rivers and caves.

It’s one of the most stunning theme parks I’ve ever seen.

And that includes going to Disneyland when I was in love with the Little Mermaid.

Then there is an unlimited buffet lunch thrown in.

Everything comes included with a single entry ticket.

If you’re only interested in one of the activities, it can be expensive.

But once you do two or more, they work out to be very good value.

Every time I go on a zip line I do the same thing.

At first I’m a little apprehensive and not sure whether I trust the equipment.

After two successful zip lines I relax and enjoy it.

Xplor has got 14 zip lines that cover almost two miles.

So for me that meant 12 I could really enjoy.

The network of zip lines takes you well above the jungle, but then drops you right into the middle of it, and you end up landing in the water.

From 50 yards above the ground you end up on a zip line that goes through a cave 10 yards below ground.

As I said I’ve done a few zip lines before.

What’s impressive about Xplor is the distance you get to cover and the different views on each line. 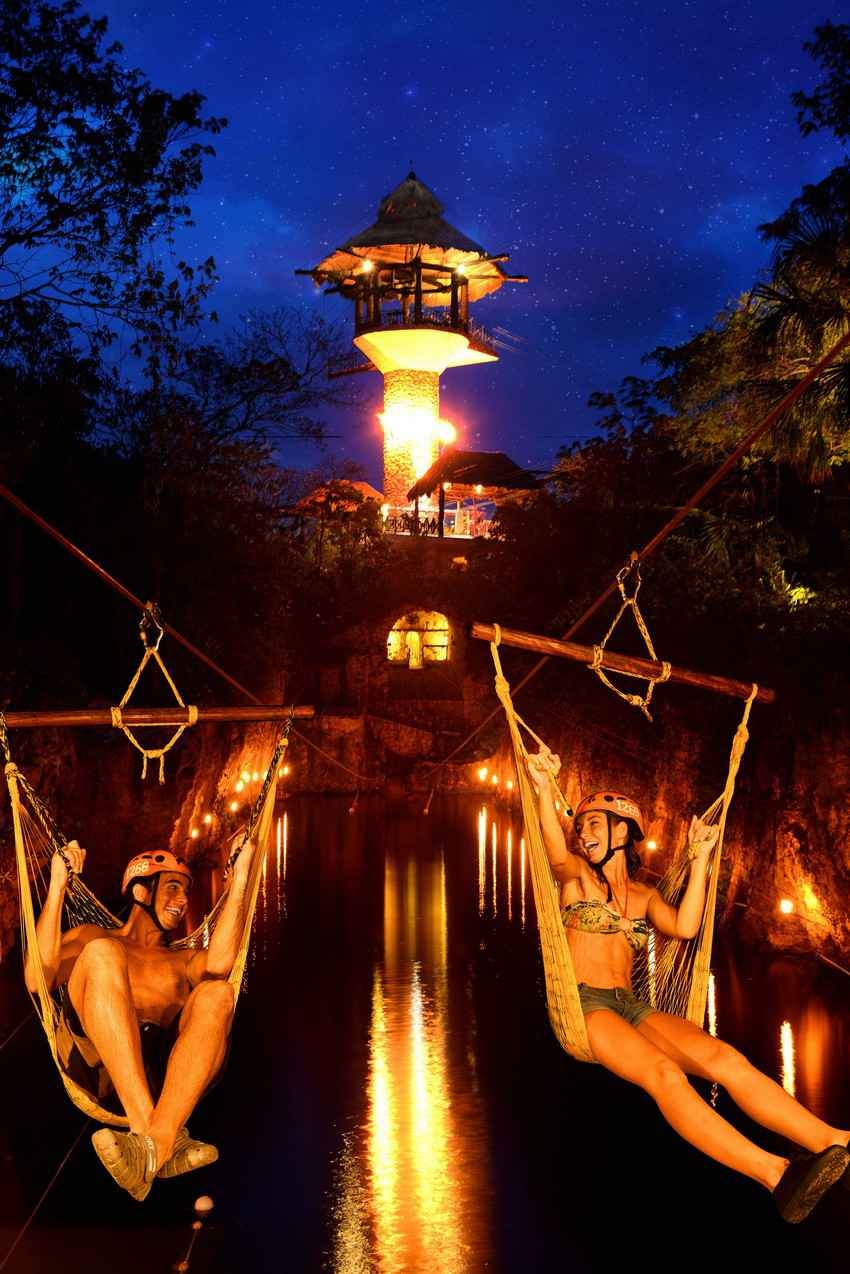 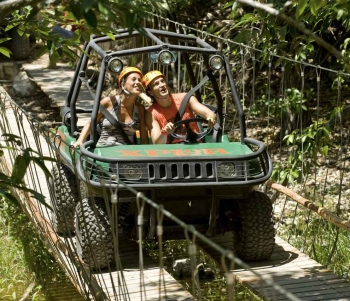 When we set off I was thinking it would be quite tame.

At first I was right – then I was wrong.

You go off road through some caves and jungle.

It’s very pretty and the views are amazing, but it doesn’t get your heart racing.

But then we ended up in a cave and the vehicle was practically swimming.

The water started rising and then I must have taken the wrong path because my legs were now underwater.

No, it was the right path! That’s why they’re called amphibious vehicles Rufus!

I’m the kind of guy that really gets his money worth at an all-you-can-eat buffet.

There was one all you can eat Chinese buffet in the States that actually banned me from entering.

Although I did sneak a load of spare ribs into my bag as a take away.

Xplor’s buffet was one of those where you get confused by the choice and sit down with a plate that’s completely overflowing.

I couldn’t decide so ended up taking everything.

I think even the Mexicans were discussed at the by my table manners. 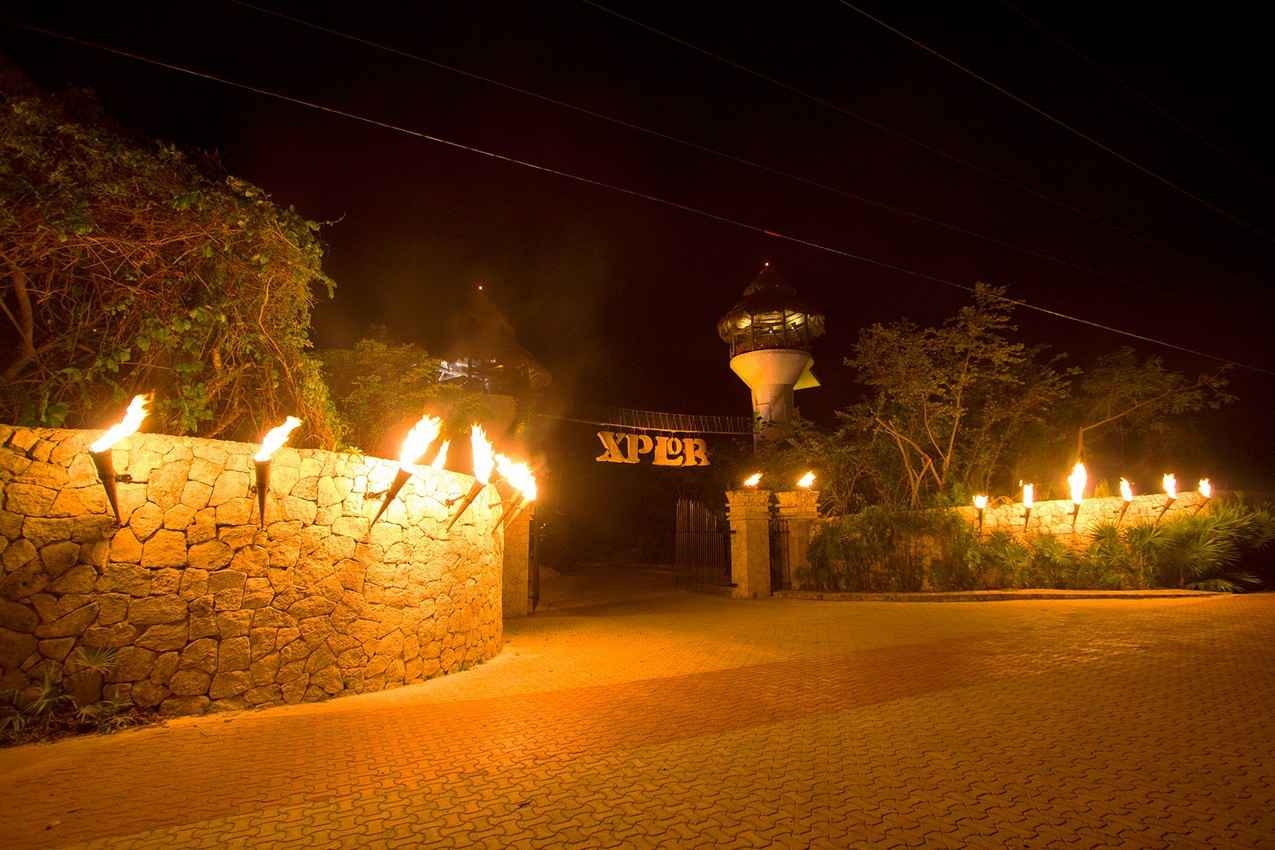 I was going to swim, but with a belly so full I knew I would sink. 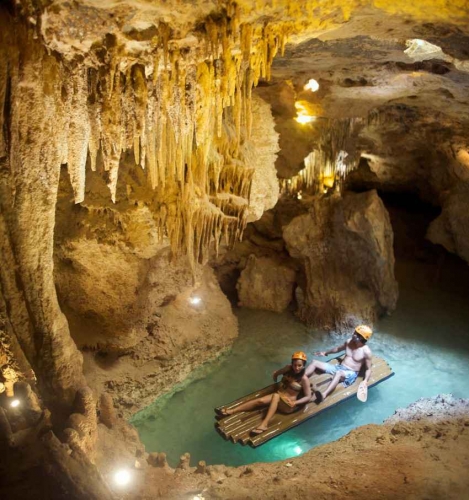 The rafts are basic bamboo structures that you paddle with your hands and some strange hand paddles that the park provides.

They’re pretty primitive but they’ve had the sense to hollow out a comfy space for your ass.

It’s not really about the raft.

It’s about the spectacular caves that you explore.

They’re full of the most unbelievable rock formations.

I don’t want to overdo the superlatives here, but these caves are incredible.

Following the labyrinth of waterways you never know what’s around the next corner.

Then you turn the next corner and it’s some mythical cavern.

When I did go swimming, they could see how much buffet I’d consumed and gave me a life jacket to help keep me afloat. (I think everyone gets them, but I have to assume everyone also overeats at the buffet.)

Using a guide line, you follow the river through the caves, enjoying the underwater scenery.

In some passageways the stalactites (or should that be stalagmites – I failed geography at school) drop down so far they almost touch the water.

At other times the river opens up into a large open space of turquoise water.

The water is warm, and I could have spent a whole day swimming around the caves.

But I wanted another go on the buffet. 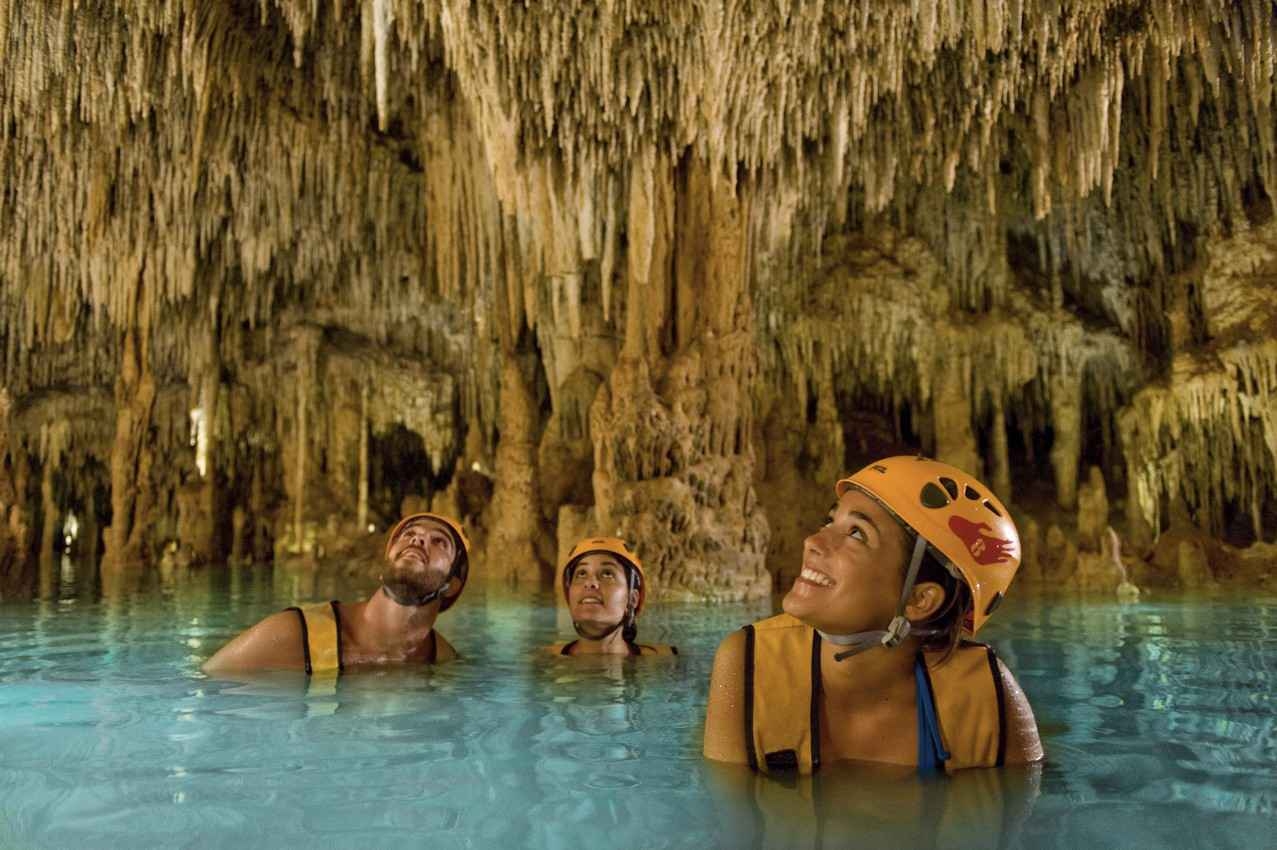 How Much Does Xplor Cost? 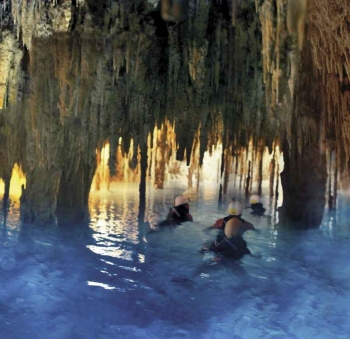 Entrance to Xplor costs $109 USD and includes all the activities and the buffet, plus unlimited soft drinks (unfortunately, not beer).

Xplor is open 9am – 6pm, and to fully enjoy it, I recommend coming for at least six hours.

You should allow at least one hour for each activity.

If you are going to visit another X-Park, like Xcaret or Xel-ha then you can buy a combo ticket that saves you around 10%.

Pretty much anybody can go.

But the minimum height for zip lining is 1.4 meters.

And if you weight over 300 lbs, they ain’t going to let you on the zip line!

What Should I Bring?

There are wet and dry activities, so you need to bring a swimming suit and towel, as well as some dry clothes to put on afterwards.

It’s also essential to have some shoes that you don’t mind getting wet.

Only biodegradable sunscreen is allowed, so don’t bring any of that cheap stuff that puts a hole in the ozone layer. 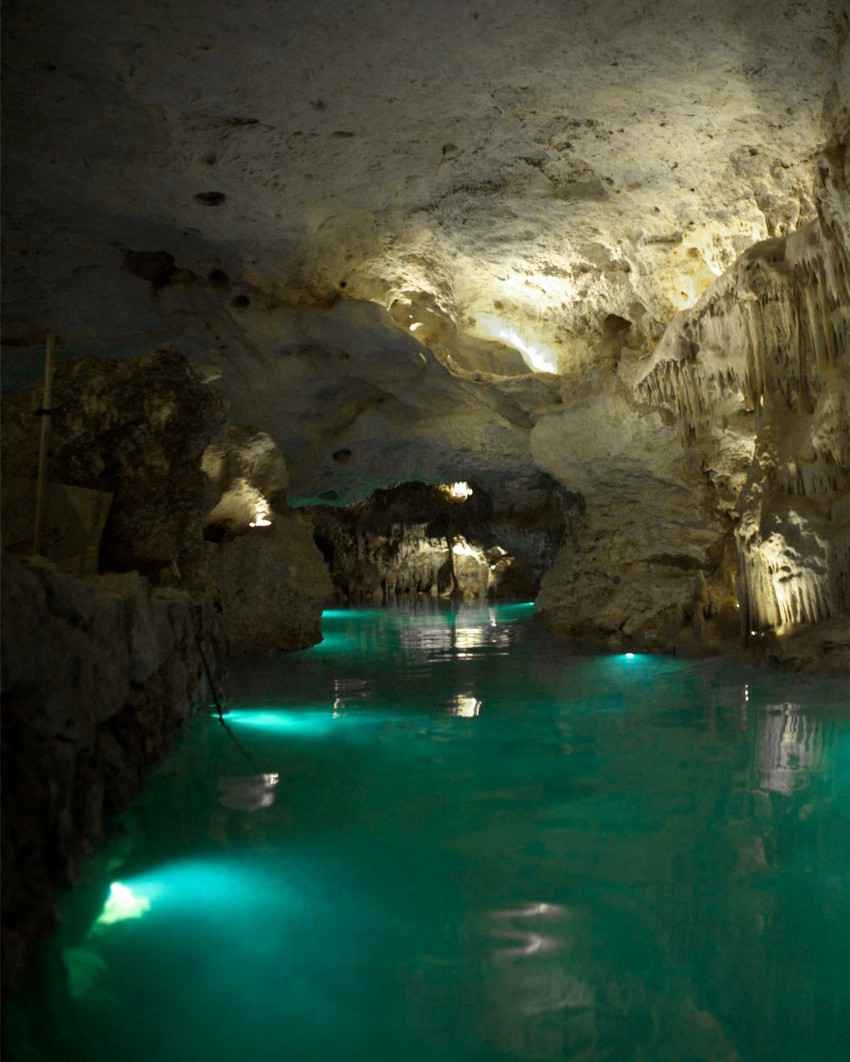 What Else Should I Know About Xplor? 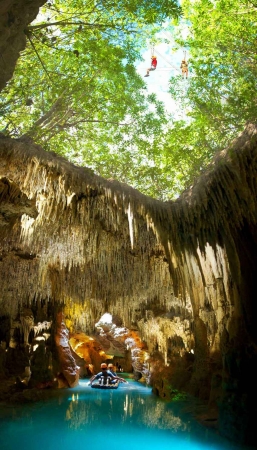 There are loads of different activities to do around Playa Del Carmen.

Xplor is the latest adventure park on the market.

It does sound quite expensive, but with everything included, it works out to be a good value.

I also perhaps prefer Xplor over Xcaret because it’s quieter and completely about nature.

Plus it’s around the corner from Playa Del Carmen so there can be no excuses for not getting there.

Now it’s your turn! Have you been to Xplor? What did you think of the experience? Please leave your comments in the section below!